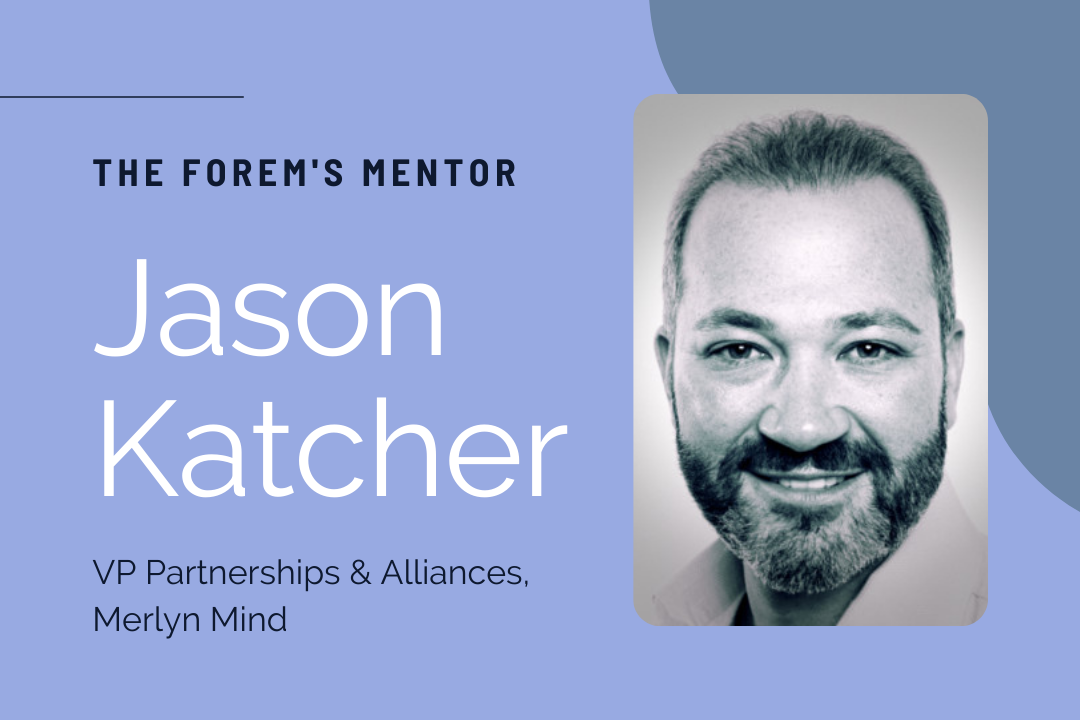 Jason Katcher, Mentor at The Forem and VP of Partnerships and Alliances at Merlyn Mind, did not see a true passion in his career arise until 2013 — a full eight years after he started at Google as an inside sales rep.

Which proves something we say constantly at The Forem: careers are a journey, and the people you meet along the way will help guide you to find a true “fit” for your strengths and passions.

For Jason, this is a big part of why he chose to become a Mentor.

“I believe paying it forward is part of our duty as people. I can remember being part of the G2G program that Google launched way back in 2007. It just felt like something important that would help employees and their companies become more successful. As you go through your career you pick up so many good (and bad) learnings that shaped how you got to that place, so why not help people make fewer mistakes and more good decisions? That said, sharing knowledge needs to come from a selfless place. If you are doing it to expect a return, then you are doing it for the wrong reasons. Just focus on helping people while building your network and dividends will come when you least expect it.”

Jason’s desire to pay it forward and help others became clear to him in 2013, when his passion was clarified for him in his new role.

“When I moved from Google Ads to Google Education in 2013, I saw a true passion for me arise. It wasn’t education technology per se, but rather what we were really doing for students across the world. Democratizing access to information and ultimately to a better life through more affordable tech. This has become a north star for me with anything I spend time doing. It was the “aha” moment.”

Many of us may feel that we don’t know what our “north star” is, or feel that our passions and hobbies may have nothing to do with our roles. It is true that your career may not always line up with what you truly desire or care about, but by constantly seeking it out — and staying in tune with what creates energy for you — you can build on your current role towards something that checks all the boxes.

For example, Jason moved from Google to a startup because he realized that in addition to his passion for helping others, he also wanted more versatility from his role and the chance to truly shape the future of a business.

“One of the largest benefits of working at an early-stage company is that you are able to wear many hats to contribute to the success of the organization. If you are someone who gets bored with monotonous environments, a startup will ensure no day is like the one before it,” he reflected to us. “Separately, you are exposed to all areas which is not something you often get to see at a larger company, especially if you are someone on the business side who wants to get closer to the tech side. I’ve taken the approach to continuously build and diversify my toolbox so companies and others see you are a swiss army knife who can pull out the right skill at the right moment to create value.”

Of course, this change did not happen overnight, and working at a startup comes with unique challenges.

Jason went through several career shifts that helped him realize he has a great capacity to adapt to change, which makes him a good fit for early-stage businesses. It also makes him an important resource for anyone at The Forem struggling with career shifts brought about by COVID-19.

“After a long career at Google and being fortunate to wear many different hats, I was also part of 4 companies where the exits were all unexpected and for different reasons. I was always able to handle ambiguity and change, but this forced me to shift into another gear. I realize, especially after 2020, that many people have been impacted due to no fault of their own. I’m hopeful some of my learnings will help those I connect with to build out faster pathways to the next step of their career. Paying it forward is a crucial part of the power of mentoring others, and it’s why I strive to be a lifelong learner. The more lessons we learn from each other, the happier our careers and lives will ultimately be.”

Finally, as we often say in workshops and in our newsletter: you are your most important asset in your career. This is a lesson Jason learned early on and has carried with him throughout the years.

“Early in my career (when I was a stockbroker if you can believe it), I had a manager who I thought just could not stand me. He was always on my back and I could not figure out why. One day in his office I asked him point-blank why this was the case and he responded that I wasn’t using my talent to my full potential. He told me to stop trying to be like everyone else and leverage what was unique to me — my personality and ability to connect with people quickly. I never forgot that discussion, and it has been something I incorporate into my day to day and share with others in any career guidance conversations.”

Book: Genghis Khan and the Making of the Modern World by Jack Weatherford

Jason has spent the last 15 years across the education technology landscape. Upon joining Google in 2005 as an inside sales rep, he worked his way up to start and lead the first advertising pod focused on Education. That business ultimately grew to $300M, which is when he wanted to pivot completely to broaden his toolbox and joined the Google for Education team in the Enterprise segment of Google, where he oversaw the GTM efforts for NA across Chromebooks, G-Suite, and Classroom for K12. Following his 10+ years at Google, he spent 2 years leading Dropbox’s NA EDU business from 2015-2017 which is how he really cut his teeth in the world of SaaS.

Ultimately though, Jason loves education and doing his part to democratize access to tools that enable people to become their best selves. Given that, he ultimately spent 2018-2020 between a K12 start up, 6 months at Flatiron School (owned by WeWork), and another 3 months at 2U, an online education provider. He is thrilled to have joined a very promising AI edtech startup in August 2020 and now leads edtech partnerships across K12 at Merlyn Mind, who just exited stealth mode this week! After 20 years in NYC, he and his family are en route to the NJ suburbs shortly. He is a graduate of Michigan so #GoBlue at all times, spends his non-working hours relentlessly reading about finance, particularly precious metals and crypto, while listening to some of his favorite artists such as Nine Inch Nails and Tool. Lastly, life is all about balance so never forget to incorporate mindfulness and wellness wherever possible. If any of that interests you, let’s chat!