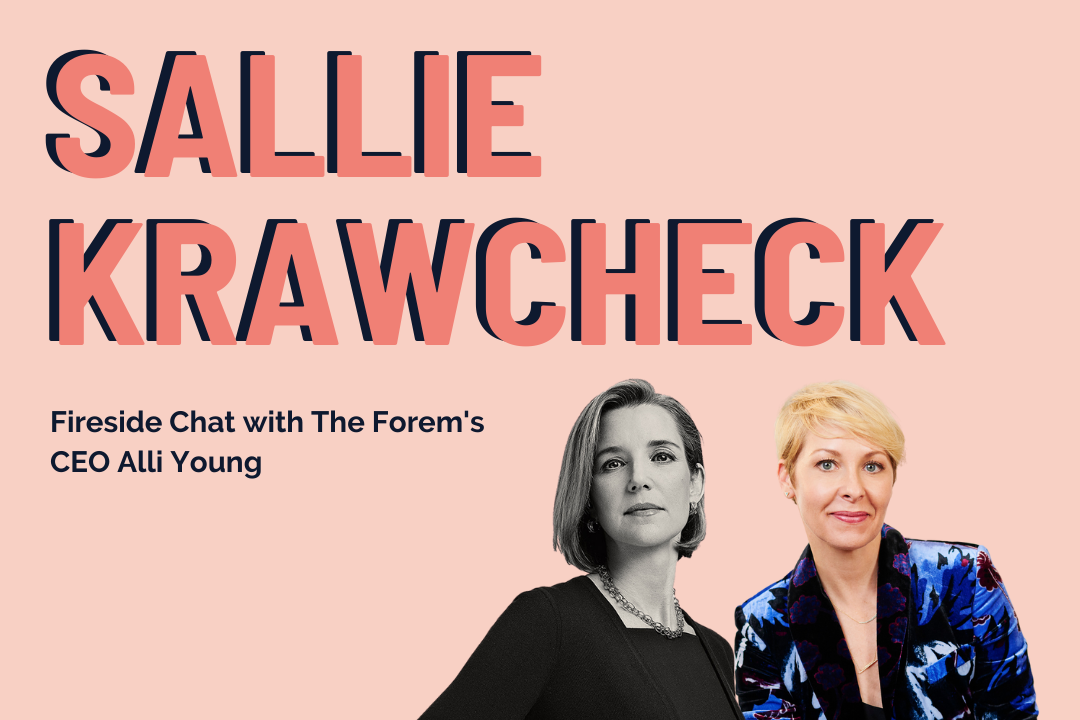 It was our pleasure and privilege to host the Founder and CEO of Ellevest, Sallie Krawcheck, for a discussion with The Forem’s CEO, Alli Young. Through the narrative of her own famed career journey, Sallie shared invaluable insights, wake-up calls, and hard facts that any corporate woman could (and should) leverage for her own growth.

From investment advice to career do’s and don’ts, here are three of Sallie’s pro-tips for being financially fearless and professionally powerful.

Yes, Women… You ARE Good with Money

In Sallie’s words, “investing has felt unapproachable [for women], because it has been.” We’ve all either experienced it or heard stories: you schedule an appointment with a financial advisor only to meet up with an older white man that *at best* you don’t connect with — and at worst is sexist, racist, or completely lacking in respect for your personal financial goals.

Just because we’re socialized to think we’re bad with money and math doesn’t mean it’s true. In fact, many studies claim women are actually better at mathematics than men. Given that we also tend to live longer, we should be investing to grow our wealth even more than our male counterparts.

Yet when women seek financial advice, we are often gaslighted for our spending habits, told we’re “risk averse” (we’re not… we’re just more risk aware), and sent out the door with a mediocre investment portfolio, if even that.

And the proof is in the numbers.

On average, women own 32 cents for every white man’s dollar. If you’re Black or Latinx, the situation is even worse. These women own pennies, comparatively.

On the flip side, men are brought up to believe they are “masters of the dime”… even though 70% of women find upon their male partner’s passing that there’s much less wealth on hand than they were led to believe.

The best way to increase your wealth has historically been to invest. Meaning: more women need to feel comfortable taking to the stock market if we’re ever going to close that gaping wealth gap.

If the state of the world is the only thing holding you back…think again.

The stock market is always in flux, but traditionally it tends to grow. Put whatever amount you’re able to aside and let it ebb and flow until you need it.

Sallie recommends that with every paycheck, you shoot for allocating 50% towards needs (food, utilities, etc.), 30% towards fun (don’t let anyone shame you for buying that latte), and 20% towards “future you” (personal goals, like buying a home and retiring).

BUT: before you will feel comfortable investing, she also advises you first 1) pay off any debts, 2) build an emergency fund (3-6 months of pay), 3) establish a 401k… and THEN put the rest into a diversified investment portfolio. We recommend doing so with Ellevest.

Don’t Beat Yourself Up Over Every Lost Opportunity

Of course, accruing wealth is far easier when you’re sustaining a strong career trajectory. However, along with the wealth gap, we’re also painfully aware of the compensation and mobility discrepancies between men and women in corporate America.

Sallie reminisces on the many twists and turns in her career that eventually led her to branching out on her own to start Ellevest. From her more junior years all the way up to the C-Suite of major financial firms, she faced blatant sexual discrimination.

The “rules of the corporate game” became painfully clear with every opportunity lost or snatched away from her due to unfair biases: visibility is the only way to secure your role and advance your career, and even that isn’t always enough.

“If your value is not seen or known it doesn’t matter. It’s not fair, not cool, but it’s also the reason more women are starting businesses,” Sallie explains. “If you don’t know who is in that room, things can easily turn against you.”

That said, you “know when you know” that someone has your best interests in mind and will vouch for you behind closed doors. If you’re skeptical that the scales may not be tipped in your favor, it’s not necessarily your fault. In Sallie’s words: “If you are honest with yourself that your work is good, sometimes it’s your boss, not you. They are socialized to view someone in the next role as a white male because that’s how it always has been.”

Sallie’s personal coping mechanism for butting up against this reality? Have a “first day of self pity, second day of action.”

“The #1 reason women start businesses is to create the business they want to work at,” Sallie shares. Which is precisely what motivated her to start Ellevest.

After being replaced at Bank of America by an older white male with far less experience and taking some time to reflect on her personal goals, she decided that making an impact was the most important thing for her at this stage in her career.

Now, thanks to a whole lot of grit, a strong network of intelligent women, and a commitment to a greater good, Ellevest is helping women of all ages across the United States become empowered investors in their futures.

Find out how you can join here.