Coming Into Her Own: How Laurie Battaglia Found Her Career Calling 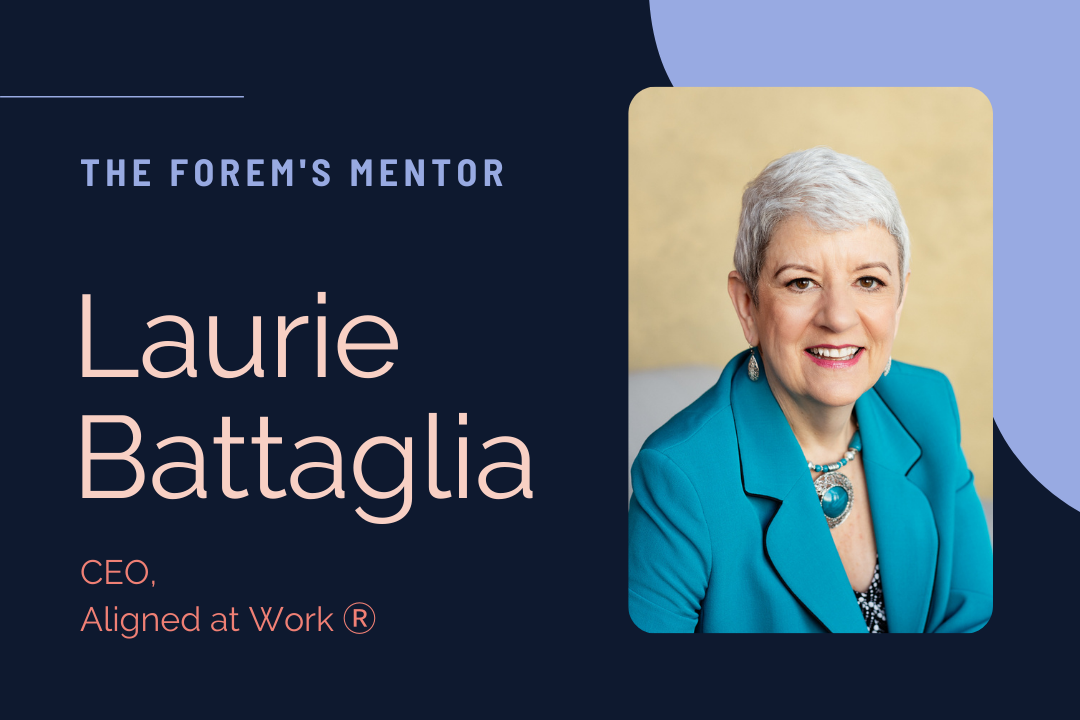 Laurie Battaglia, Founder and CEO of Aligned at Work (and Mentor at The Forem), tried all sorts of roles in her career before she found her calling.

“I realized early on that business ought to balance people and profit, but I was seeing that it was all one or the other. It was the birth of my entrepreneurial journey, and the birth of the work I do now. But it took me 22 years to stop fulfilling the obligations and responsibilities I thought I had to others, so that I could focus on this business I’d been planning for and dreaming of.”

She spent a large part of her journey learning to listen to herself in order to identify her true passions and skill set.

“During those 22 years, I tried a lot of different things, but I always kept coming back to developing others (and myself) first,” Laurie reflected to us recently. “I started keeping track of what energized me after completing a coach certification in 2011 (core energy is the focus of my coaching school). It’s been mind-blowing to understand what lights me up, and what brings me down.”

As CEO of Aligned at Work, Laurie’s primary focus is working with leaders of organizations to create inclusion in their cultures and leadership styles and practices. She and her team do this through Diversity/Equity/Inclusion/Belonging consulting and training, and through aligning leadership teams to lead well.

As a Mentor for The Forem and a career coach, Laurie’s goal is — in her words — to “help people figure out what they want to be when they grow up” and to help them get there.

“This question comes up so many times during our lives, and it usually changes midlife and into “retirement,” whatever that is. Exploring life transitions and pivots keeps me doing career coaching.

Laurie knows that our career paths often don’t look the way we expect them to. They aren’t always a straight line, and each new job isn’t always better than the last.

“The best piece of advice I ever received was that “up” is not the only way in your career. You’ll likely have times when it’s up, up, up…. and then it isn’t. It’s hard when you hit a plateau, or when you’ve accomplished your initial goals and don’t have a career direction. At that point, it’s Rest, Nest, and Test. Take time to recharge, get quiet, try things you haven’t tried before to see what resonates. Then take inspired action and move forward. The right thing for you will show up.”

The idea of “Rest, Nest, and Test” is something that Laurie herself has implemented and lived. She developed it partially after experiencing her own career low point.

“In 2010 my husband and I were able to make a long-time dream come true, and we moved to Arizona from Pennsylvania. I finally found a role with my employer (at the time) that allowed me to relocate us, and we set about putting the wheels in motion for this cross-country move.

Within the first month of moving, I realized that I had taken the wrong job with the wrong boss. And I was intentionally the only one working at the time, plus it was in the middle of the recession in the US. In this smaller site, I couldn’t rescue myself through connections, and there were few job openings in my field available in that location. My spouse was unable to find work in his field.

I told myself a lot of stories — I was getting older, I’d lost my edge, I hadn’t paid attention to what the job really was, I was going to get fired. This went on for 15 months while I decided to get my coach certification, applied for a number of positions, and finally landed one in a different company. This story has a happy ending — I went from worst boss ever to best boss ever, found a team and a role that I loved, and stayed four years while I built my business owner skills.

What I learned is that nearly everyone has a “career shame story” and that they’re convinced that it was their fault, and they believe the hype and the stories they are telling themselves. To put it in the words of a friend who saved me from myself at the time, “It’s time to move on and reclaim your power.”

Now, Laurie loves everything about her job — and she hopes to help you find the same fulfillment in your career.

If you are a Member, you can book time with Laurie on the platform. To find out how to join The Forem, click here.

Books: Drive by Dan Pink; The Underground Railroad by Colson Whitehead; Where the Crawdads Sing by Delia Owens.

Thought Leader, Writer, Speaker, and Transformer of people, cultures and workplaces, Laurie Battaglia is CEO of Aligned at Work® in Scottsdale, AZ. Having spent 35+ years leading people in corporate environments, Laurie discovered ways to engage team members, build trust quickly, and align them to create happy and high performing workplaces. Her life’s mission is to change the culture of workplaces into inclusive places where all people feel they belong.

Laurie is the creator of two models: The Aligned for Life Model™ and the Aligned Leader™ Model. The first is about work and life integration, honoring the entire human, rather than compartmentalizing our various roles. And the latter is a model for inclusive leadership and creating cultures that embrace differences in the humans within. She authored the book “Aligned Workplaces: Integrating Life and Work-A Practical Guide for Leaders and Teams.”

Laurie has held positions of leadership at Wells Fargo Bank, Vanguard Mutual Funds, and other financial institutions on the east and west coasts. She was VP of Learning and Development managing multiple remote teams of professionals, and spent significant time in client service, operations, marketing, sales, and finance. She holds an MS in Organizational Development & Leadership from PCOM in Philadelphia, PA. Laurie is a Professional Certified Coach (PCC) through the International Coach Federation, and a professional speaker who provides keynotes and breakout sessions about leadership and culture.