From Leading Google to Leading Her Own Podcast 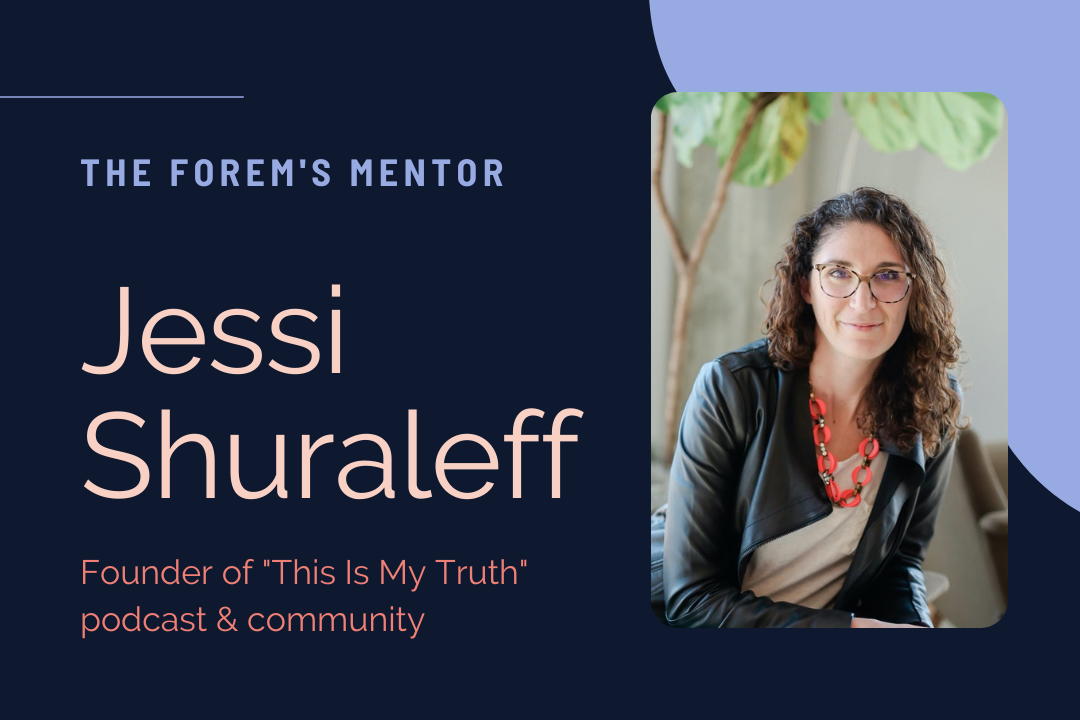 At The Forem, we are strong advocates for identifying and following your passions.

For some people, that means learning to adapt their current roles to take on more projects associated with the type of work that creates energy for them.

For others, it means leaving their current role to seek a new career path… and that is exactly what Jessi Shuraleff did after 13.5 years of leading and growing teams at Google.

Jessi is a Mentor with us, and uniquely qualified to provide support to anyone wishing to find more passion in their roles (as well as those looking to pivot and working parents).

She has a natural ability to connect with others and has always always been curious about what motivates people — whether that is in business, in life or in leadership. (Spoken like a true organizational communications major with a sociology minor!)

It was this curiosity that helped boost her career, especially early on.

“When I began at Google, I was part of the phone team — meaning anyone who called 1-866-2-Google (# no longer exists!) — came to me or one of my colleagues,” she reflected to us. “Honestly, I had no idea what job I’d said yes to at Google at that time, but there I was at 21, fresh out of college, answering Google’s support line.

You can imagine the different conversations that were had during that time in my career, but I realized early on that I had a distinct ability to build rapport — even with the most irate people calling in — and get to the root cause of their problem quickly. This skill served me well as I moved up the rank of sales within Google and eventually into sales leadership roles.”

Jessi believes that when you are able to understand someone at the core of who they are and what motivates them — and then allow them opportunities to use those skills/strengths in a way that helps THEM succeed — everyone wins.

This belief made her an excellent leader (and makes her an invaluable Mentor and resource for Members at The Forem).

Jessi joined the Mentor Program at The Forem because she knew it was a key aspect of her old job at Google that she would miss.

“I love helping people navigate career transitions (within corporate, and also corporate to solopreneurship) and helping individuals identify their ‘why’ and what that means to them from a career and life perspective. I also love helping leaders grow and learn how to lean into empathetic and authentic leadership skill sets.”

She understands that career paths can be challenging and confusing, and we need advice from the people around us in order to provide clarity… even if that advice actually helps us realize we need to do the opposite of what we are told. Above all, she encourages her mentees to trust their guts (as she has done throughout her career).

“The worst piece of career advice I ever got was when a director told me not to take a horizontal role (AE role to AE role) because “it would do nothing for my career” and instead he was encouraging me to take a role supporting Groupon who, at the time, was a very large Global advertiser within his team. While it was a horizontal move on paper, it was a role within a company that Google had just acquired — Invite Media (now DoubleClick Bid Manager).

By taking that role, I was able to gain skills and perspectives that no one in my previous org had, and I used those skills to pivot myself into roles that wouldn’t have been available to me if I had stayed (like management).”

Now, Jessi is following her passion as the founder of the membership program Storyteller’s Collective and the podcast This is My Truth, as well as building the most meaningful relationships of her career to date — with her children (3 and 5). =

“Since leaving Google, I’ve been creating community and connection through storytelling to empower women to step into their own light, reclaim their voice and drive greater impact in business, leadership and life. My membership program, a Storyteller’s Collective, is a space for female business owners and leaders who want to amplify their voice in a way that feels authentic while increasing profit and driving impact. The doors open again in July 2021!”

Jessi Shuraleff has spent the last 13.5 years at Google, effectively leading and coaching sales teams using authenticity, value-based selling and storytelling to drive impact and revenue for her customers. She has worked with brands both big and small across numerous industries including Retail, Technology, Real Estate & B2B, partnering with brands’ executive suite to build sustainable marketing strategies across brand and performance KPIs. She has recently left the corporate world and has taken the leap into solopreneurship as the founder of the podcast and community This Is My Truth.

Creating, building, and maintaining relationships is at the core of who she is and authenticity, vulnerability and storytelling have been the cornerstone of her skillset to get her to where she is today as a leader, a podcaster and a mom. Her passion is working with entrepreneurs helping them to develop their brand voice and to amplify that voice in an authentic and proven way, as well as growing their business by increasing sales while increasing profit, and/or increasing engagement across marketing channels. Her personal mission is to create community and connection through sharing personal stories to empower individuals and brands to step into their own light, reclaim their voice and drive greater impact.