It’s Not All About Passion: Andrew Brook on Finding a Fulfilling Career 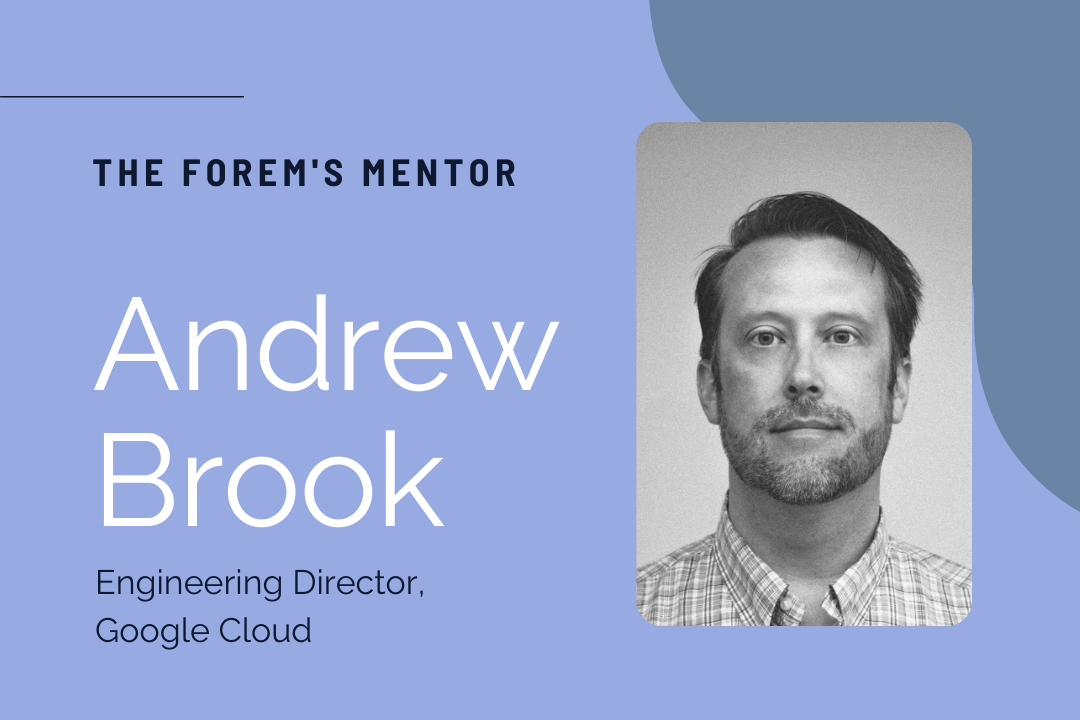 At The Forem, our goal is to help you advance your career, feel fulfilled, and connect your roles to your passion — and our mentor Andrew Brook has accomplished all of the above, even though he doesn’t believe in making passion the focus of one’s career.

“I think it’s important to enjoy and care about what you do, but it needs to be in balance with other aspects of your life.  I’m not saying you can’t combine your passion with your career (and for some people that’s really important!) but for me, science and engineering — especially software — has always been an interest, but I wouldn’t go so far as to call it a passion.  Spending time outdoors, being with family, gardening and writing are all closer to “passions” than software engineering,” Andrew reflected to us recently.

His interest in science and engineering began in grade school, when he realized he had more fun coding his own video games than he did playing ones that already existed.

“I spent a large fraction of my free time learning to code from system manuals and whatever I could find in our local library. I’ve coded as a hobby ever since, but I didn’t really take software engineering seriously as a career until my last year of high school and first couple years of college. I’d been planning to study physics but found through classes and internships that I enjoyed software engineering more than research science.”

While most of Andrew’s career has been in applied technology (capital markets, machine learning, and cloud computing in particular), he has a wide range of experience that he hopes to draw from as he focuses on helping others: from working at both startups and large organizations, holding both IC and leadership roles, and juggling work/home balance as a father of both a college student and a toddler.

“I’ve been in mentoring relationships, both formal and informal, for quite a while,” Andrew said to us. “It really comes down to wanting to pay forward the great support and advice I received from mentors in my own career, especially in early years. I want others to have that same experience. I also find that through mentoring, I get perspectives that are really different from my own. People with different backgrounds, at different stages in their careers and with different experiences, help me to better understand how the industry and society as a whole are evolving. And I learn new things from every conversation I have — it’s a great way to stay engaged and connected.”

“Look for the biggest, most disruptive changes and figure out how to lead and grow with that change rather than stay in areas that were more stable. Being involved early in the transformations brought by algorithmic trading, artificial intelligence and cloud computing, for example, has worked out really well for me even if it’s been unpredictable and stressful at times.”

Aside from providing him with a career path, Andrew’s interest in science and technology found a new outlet in his recent passion project: writing his own fiction novel.

“While the result was average at best (and I certainly won’t be able to retire on my royalties!), the process of doing something completely different from my usual work was a great experience. The satisfaction of writing a novel over the course of a couple years and getting an actual physical book delivered to you in the mail is pretty amazing. It’s given me a whole new respect for people who write for a living and helped me enhance my communications and storytelling skills — which turn out to be a lot more important in an engineering leadership role than you might expect.”

It’s yet another example of how a well rounded life can mean a well-rounded career — and that is just as important as feeling passionate about your work.

If you are a Member, you can book time with Andrew on the platform. To find out how to join The Forem, click here.

I really enjoyed The Expanse (both the book series and the TV show). It’s sci-fi set two centuries in the future but it’s also about how power works in society and how people react when their worlds are (sometimes literally) transformed. I’ve also recently started watching a lot of Bluey, which is an Australian animated children’s show that my younger daughter really likes. As kids stuff goes, it’s quite watchable.

Prior to joining Google, Andrew spent nearly two decades leading the technical transformation of financial services.  Andrew was the Chief Technology Officer of Selerity, a startup that applied machine learning and NLP to processing unstructured data in finance to drive trading strategies, recommend content and automate conversational workflows.  He was an early hire, built the technology and product teams, and wrote much of the code for handling low latency messaging, distributed query handling and analytical infrastructure.  Prior to Selerity, Andrew led development of foreign exchange electronic trading systems for Morgan Stanley and trading, prime brokerage and market risk management systems at Bank of America.  During the dot-com era, Andrew was the co-founder of an early stage venture that delivered innovative scheduling software to the agile manufacturing sector. Andrew holds a B.S. in Computer Science from the University of Illinois at Urbana-Champaign.