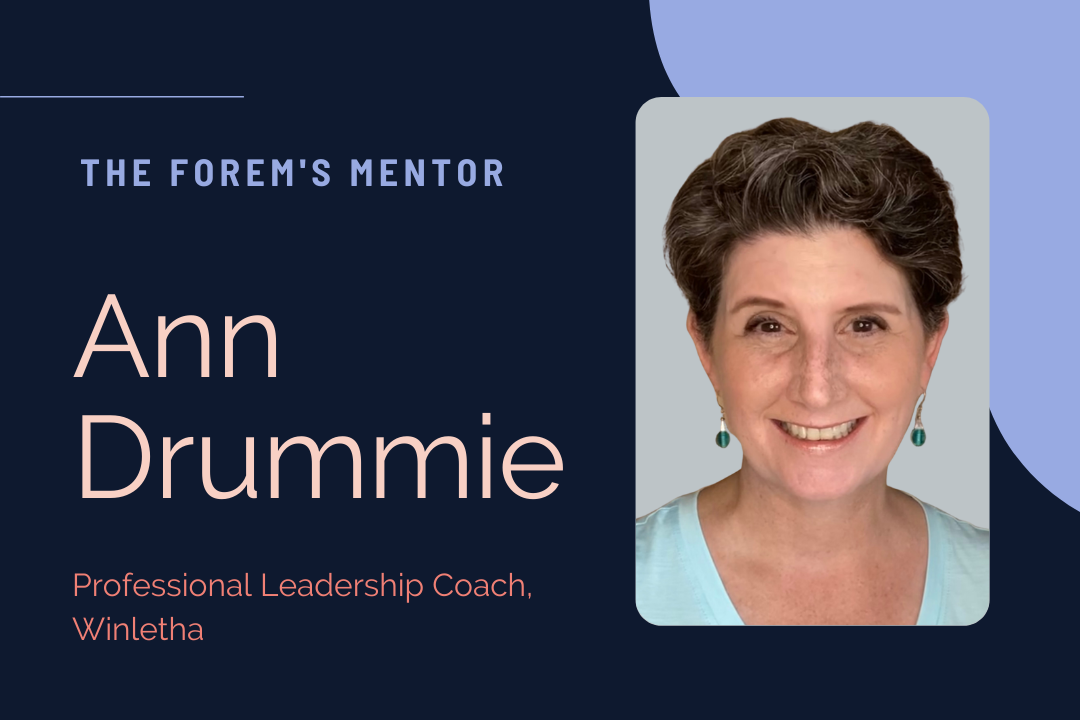 Ann Drummie experienced several pivots throughout her career — from railway designer, to university sports facility designer, to full-time entrepreneur and leadership coach. What she learned was not necessarily to always “follow her passion,” but how to check in with herself on what she knew she was missing or wanted more of.

“When I decided to leave my job at the railway, it was after I forced myself to consider “What would I be doing if I could do anything?”” she reflected to us recently. “I realized that I was far more curious about sports facilities than trains. I found a way to transfer my skills from planning and design for railways to planning and design for universities (who happen to have sports facilities on their campuses.)”

After much growth in her new role, she eventually reached a point where she needed a new goal. “I asked myself, ‘What would feel really challenging right now?’ … I realized what I enjoyed most was helping young professionals elevate and get more responsibility beyond being individual contributors. Even with all of my other duties, I had been compelled to engage as a coach throughout my career. Wanting more of that, I decided to start my own business and focus full-time on leadership coaching.”

Ann recently joined The Forem as a mentor, a role that aligns with what she is most interested in at the moment.

“As a mentor (unlike with my coaching hat on), I can share more stories and offer advice that I would have appreciated hearing earlier in my career,” she said. “As much as I wish that leadership development was ubiquitous by now, I’m continuing to learn that it is not. So mentoring is a small way I can help others navigate a challenging conversation, a difficult decision, or a complicated dynamic.”

She particularly enjoys helping people develop their leadership potential and identify next steps for expanding their leadership skills. “Having experience on both sides of the table talking about goals and asking for promotions, I’m always happy to help people rehearse,” Ann offered. She enjoys helping people find ways to enhance their environment so they can thrive.

“Witnessing someone have an “aha” moment is my favorite part of being a coach,” she stated. “I’m honored to create an environment for an individual to feel free to talk about their goals and concerns without risk or judgment. Their resulting excitement to move forward is very contagious!”

That sense of excitement and empowerment is key to career (and life) happiness. Outside of her coaching practice, Ann finds this fulfillment as a competitive curler (yes, that Winter Olympic ice sport with the rocks and the brooms) and as an instructor and Board member.

Finding and sticking to something that inspires and fulfills you is a key life lesson she lives by — and it can work out in surprising ways sometimes.

“One of my career “fails” happened when I interviewed for a two-year program that would include rotations in different departments. I quickly realized that I was not what they were looking for,” she reflected to us. “With nowhere else to go, I hung in through the whole day of sessions, but I was not at all surprised to receive the call an hour later that I was not being offered a place in the program.

“I was surprised though, that one of the Vice Presidents I had met through the day did want to offer me an unposted position that sounded great! In one day, I learned that even if you are actively failing in one thing, if you don’t run away and show up with what you can bring to the table, then you might end up succeeding in something completely different.”

After working with a railway company for seven years, Ann became an owner’s representative and advisor with a consulting company.  For 18 years, she guided university clients through the visioning, financing, designing, and building of high-profile campus facilities. Ann has advised more than 100 non-profit institutions through more than 150 real estate development projects totaling over $3 billion in capital expenditures.

Throughout her consulting career, Ann explored ways of elevating young professionals, by equipping them to thrive with more responsibility and guiding them to develop their career visions beyond just what was laid out for them.  Having been a civil engineer, she knows firsthand the transition from feeling confident as an individual contributor to feeling unsure about her own form of leadership.

She began her coaching business while living as a digital nomad for six months before being ‘grounded’ by the pandemic.  Now as the founder of Winletha, she is a strong advocate for coaching as a critical component of effective professional development.

Ann completed her liberal arts B.A. (architecture) from Smith College, and went on to obtain a M.Arch. (affordable housing) and a B.Eng.(civil), both from McGill University.  Ann has certifications from the Project Management Institute, Integral Coaching Canada, Motivation Factor, and Designing Your Life.